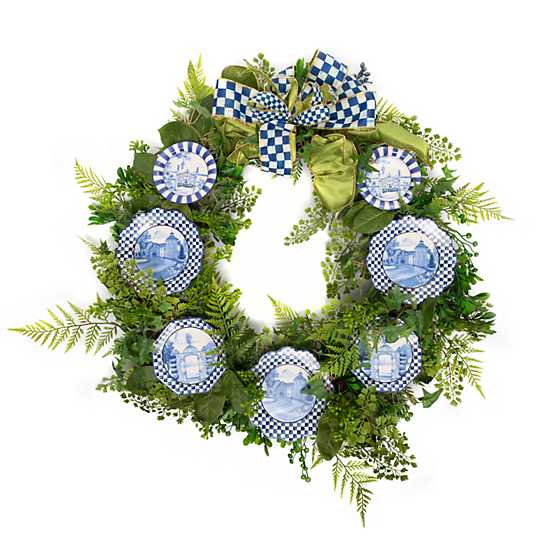 trulyMC members get a coupon for 20% off a future purchase when you spend $150 or more now through January 31! Coupons will be distributed via email on February 1 and will be valid through February 28, 2022. Not a member yet? Sign up today! Details
Offer applies to online, phone, and in-store orders placed between January 18 and January 31, 2022, only. Discounts cannot be combined and do not apply to tax or shipping, or purchases of gift cards. One coupon per customer. Coupons will be valid on mackenzie-childs.com, through our customer service center, and in our store in New York, New York. You must qualify and sign up for trulyMC, the MacKenzie-Childs loyalty + rewards program, or already be a member, to participate in this offer.
Product Number: 34742-3600
Our Royal Toile Fern Wreath is pure blue bliss. It features miniature ceramic plates decorated with images from our farm done in classic blue chinoiserie style, including our studio, gazebo, and the Mrs. Powers Garden Gate, which leads to our one-of-a-kind Chicken Palace. Royal Check ribbon provides the finishing touch.
Refer a friend & Earn Points 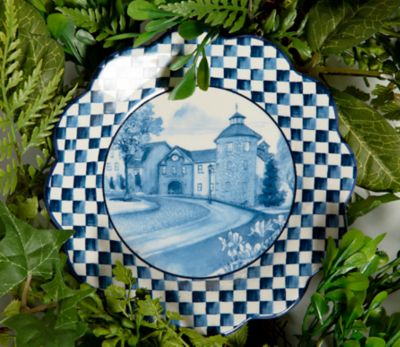 The studio, the centerpiece of our 65-acre estate, clearly says you have arrived at MacKenzie-Childs. Located at the end of a winding brick driveway, it features an iconic archway that links our production areas, where our hand-painted ceramics and furniture are created, with the Tour Center and The Shop, our retail store. It was built in stages from 1993 to 2000 after a dairy barn that housed our production areas was destroyed in an electrical fire in 1993. The first areas completed were the production facility, archway, and silo, followed by the brick courtyard that is outside The Shop. That space was originally an employee cafeteria, and it is the third retail facility that has been on the estate. The first was a small one-room building across from the Farmhouse, and the second was on the ground level of what is now our Enamel Barn. The final buildings in the studio complex to be built were storage and shipping areas, which are behind the production facility. 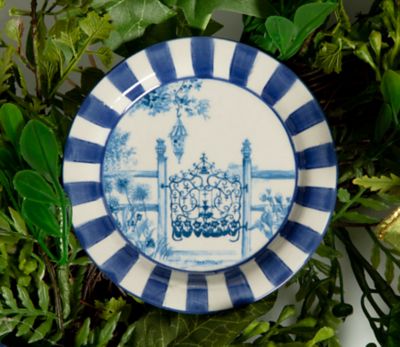 The Mrs. Powers Garden Gate is made of iron and features a unique design that includes blooming flowers, swooping curlicues, and bells, with a garden gal swinging on a sunflower swing. The gate is named for the late Joan Powers, a local resident who had been a friend of Rebecca Proctor, our creative director and chief brand officer. Beyond the gate is our one-of-a-kind Chicken Palace, which was built in the 1990s. It was designed by one of founders, who had an affinity for finding architectural salvage. Today, the Chicken Palace houses our menagerie of animals, which currently includes two geese (Sammy and Charlie), one chicken (Stacey), and four sheep (Libby, Brodie, Bretta, and Dolly), which are lovingly cared for by our estate manager, Corinne Bowman. 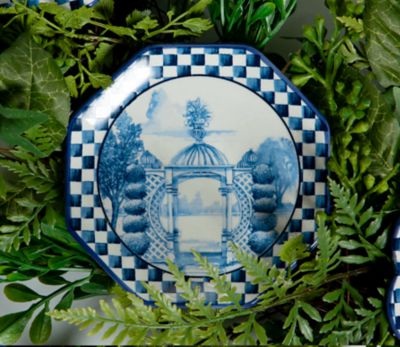 The gazebo, which overlooks our pond, also was designed by one of our founders. It was built around 1996 in our on-site wood shop, where several of our furniture pieces are also built. This intricate design features lattice on all sides with two cozy seats. Oval “windows” look out over the estate. The flower bouquet finial on top was originally ceramic but has since been replaced by a similar finial made of metal. If you haven’t seen these iconic landmarks of our 65-acre estate in Upstate New York in person, we hope that you will!

Fabric and paper leaves, natural accents, styroberries, resin décor, and polyresin ribbon. Ceramic plates. Pieces may vary due to the handmade nature of each product. Imported.