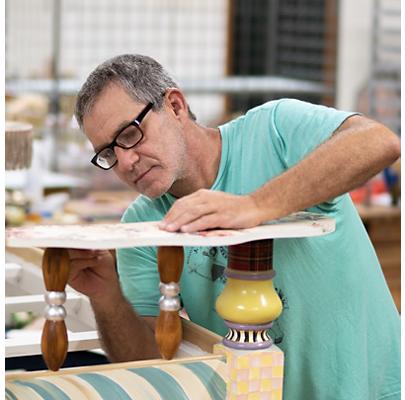 Mark, who has been with MacKenzie-Childs since 2012, enjoys the variety of working in our finishing department, which is where furniture pieces get their final signature touches. “Here, I am constantly shifting from one thing to another. It’s hard to catch me doing the same thing twice,” says Mark. His tasks can include everything from decoupaging special papers to a piece to adding knobs, hardware, and our nameplate logo. Mark also floats to other departments, helping as needed and has even stepped into our sewing area, where he helps with upholstery and makes occasional serendipity pieces. When he isn’t working, Mark likes to carve wood, using yew to make figurines that will be game pieces. Each piece can take from 60 to 80 hours to carve. Yew is the perfect wood for carving, Mark says, because it’s strong enough to be highly detailed yet springy enough to be flexible. “It’s almost like carving in soap,” he says.